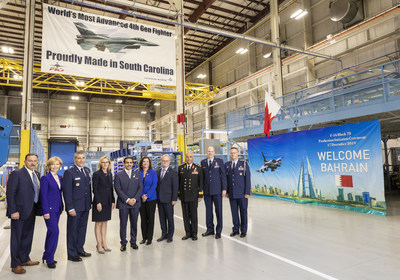 "Lockheed Martin's partnership with Bahrain began more than 40 years ago and it continues today with the F-16," said Bridget Lauderdale, vice president and general manager of Lockheed Martin's Integrated Fighter Group. "Bahrain was the first country in the Gulf region to acquire the F-16 and the first customer in the world to procure the advanced F-16 Block 70."

"Bahrain has been a strategic partner and friend to the United States, and South Carolina was pleased to host the delegation today," said U.S. Senator Lindsey Graham. "We are proud of the hard-working folks at Lockheed Martin in Greenville, making one of the best jets to ever take to the sky, the F-16 Block 70."

The F-16s manufactured in Greenville ‒ for international customers ‒ will be the newest and most advanced F-16 production configuration ever offered, combining numerous capability and structural improvements. F-16 production is creating hundreds of new jobs in Greenville ‒ supported by more than 400 suppliers in 41 U.S. states ‒ and positioning the site to grow.

"South Carolina has established a legacy of being capable of manufacturing the most advanced products in the world, and with the help of Lockheed Martin's investment in Greenville, we are further solidifying that legacy," said South Carolina Gov. Henry McMaster.