DENVER, July 11, 2022 /PRNewswire/ -- Today at a White House press event, NASA released the first image of some of the earliest light in our universe, taken with an instrument that Lockheed Martin (NYSE: LMT) designed and built. The debut photo from the James Webb Space Telescope's Near Infrared Camera (NIRCam) is the first from one of the most sensitive infrared cameras ever built to observe the universe. 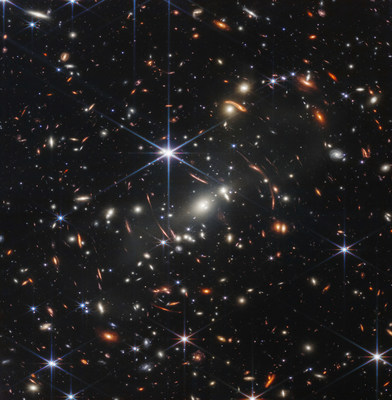 The company created the scientific instrument at its Advanced Technology Center (ATC) in Palo Alto, California, for the University of Arizona.

"NIRCam is a first-of-its-kind camera, and we are proud to have built this primary imager on the Webb telescope," said Alison Nordt, space science and instrumentation director for Lockheed Martin. "Our camera is key for observing the first galaxies that formed after the Big Bang and for achieving all the telescope's science objectives. NIRCam also played a crucial role aligning Webb's optics, as it informed what adjustments needed to be made. The image released today demonstrates that NIRCam's performance is excellent for all types of planned science observations."

Capturing the Past to Improve the Future

Webb is the largest, most powerful space telescope ever built, and it will reveal what our universe looked like some 13.5 billion years ago. Throughout the mission, it will seek light from the universe's first stars and galaxies, investigate how galaxies form, explore the birth of stars and study planetary systems – as well as objects in our own solar system.

After playing a major role in aligning Webb's intricate array of mirrors earlier this year, NIRCam will now take science images throughout the entire mission. At one million miles away from Earth in space, it holds the responsibility of functioning with utmost precision and stability in extreme temperatures.

It is critical that Webb continues to provide crystal clear images for the duration of its mission. To enable operations in deep space, Lockheed Martin developed a new technique for bonding NIRCam's optics mounts together. This method guarantees that neither cold nor slight vibrations cause shifts in the microscopically precise alignment of NIRCam's lenses.

NIRCam continues the success of the company's space observation platforms, from the Lockheed Martin-designed, -built and -operated Hubble and Spitzer Space Telescopes staring deep into space, to earth-facing technologies, which we're building now to observe weather and carbon emissions on our own planet.

Lockheed Martin is also famed for producing some of the most sophisticated science and weather instruments in the industry. Most recently, these include the first-of-its-kind Geostationary Lightning Mapper and the Solar Ultraviolet Imager instruments on NOAA's current GOES-R weather satellites.

For over 50 years, Lockheed Martin has also helped NASA explore every planet of our solar system, and continues to develop new technologies for future space missions.

Headquartered in Bethesda, Maryland, Lockheed Martin (NYSE: LMT) is a global security and aerospace company that employs approximately 114,000 people worldwide and is principally engaged in the research, design, development, manufacture, integration and sustainment of advanced technology systems, products and services.

Please follow @LMNews on Twitter for the latest announcements and news across the corporation, and follow @LMSpace to learn more about the latest technologies, missions and people driving the future of space.