STRATFORD, Conn., Feb. 20, 2020 /PRNewswire/ -- Sikorsky, a Lockheed Martin company (NYSE: LMT), will build six production VH-92A® Presidential Helicopters under a contract from the U.S Navy. These helicopters are part of the 23 aircraft program of record for the U.S. Marine Corps. 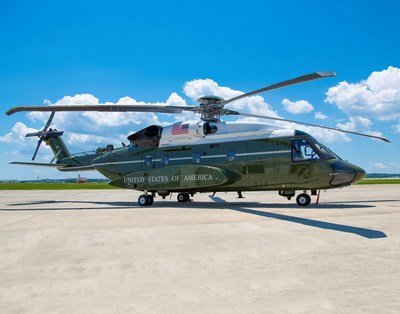 Under the terms of the contract, known as Low Rate Initial Production (LRIP) Lot II, Sikorsky will begin deliveries of six VH-92A helicopters in 2022. The remaining production aircraft will be delivered in 2022 and 2023.

"The program continues to progress on budget and within our planned acquisition timeline," said Col. Eric Ropella, PMA-274 presidential helicopter program manager. "The award of LRIP Lot II reinforces the importance of this Marine Corps no-fail mission especially as we move into the next phase of government testing this year."

Helicopter on Track to Meet Milestones

The VH-92A test aircraft at Patuxent River, Maryland, have proven their production readiness by undergoing rigorous U.S. government testing and operational assessments, including more than 1,000 flight test hours establishing the aircraft's technical maturity and readiness of its mission systems.

"Now that we are ramping up production, the VH-92A program is gaining momentum," said Dave Banquer, Sikorsky VH-92A program director. "This second contract award demonstrates the confidence the U.S. Marine Corps has in Sikorsky's proven ability to deliver and support the next generation Presidential helicopter."

All six of the production aircraft from the first Low Rate Initial Production contract are undergoing modifications at Sikorsky's Stratford, Connecticut plant and are on schedule to begin deliveries in 2021.

Sikorsky and the U.S. Navy integrate mature mission and communication systems into the aircraft. This aircraft provides communication capability to perform the duties of Commander in Chief, Head of State and Chief Executive.

The VH-92A aircraft will provide safe, reliable and capable transportation for the President and Vice President.

This program ensures long term affordability and maintainability by utilizing the FAA certified S-92 aircraft which has industry leading reliability and availability. The S-92 fleet surpassed 1.5 million flight hours in 2019 and averages 14,400 hours of safe flight per month.

"The men and women of Sikorsky treasure our legacy of building and providing helicopter transportation for every President and Commander in Chief since Dwight D. Eisenhower," said Banquer. "We are proud to continue that legacy with the VH-92A helicopter."

VH-92A is a registered trademark of the Department of the Navy.