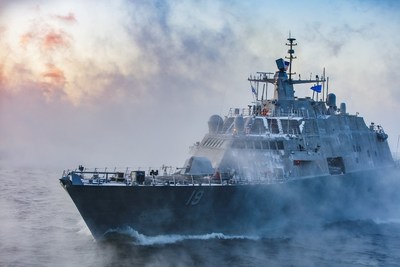 "With LCS 19's delivery, the U.S. Navy has 10 Freedom-variant Littoral Combat Ships in the fleet. LCS 7 recently deployed, and it is gratifying to know that our team has delivered a ship that is relevant for today's fight and that is needed around the world," said Joe DePietro, Lockheed Martin vice president and general manager, Small Combatants and Ship Systems. "Our team is encouraged by the positive feedback we've received about LCS 7 on deployment, and we continuously look to incorporate fleet input into capabilities on LCS hulls."

Today, the Freedom-variant LCS delivers advanced capability in anti-submarine, surface and mine countermeasure missions. LCS was designed to evolve with the changing security environment. Today, as we see an increase in near-peer competition from large nation states, Lockheed Martin is partnering with the Navy to evolve LCS to meet these threats. Upgrades are already underway – the LCS computing infrastructures are receiving cyber upgrades and naval strike missiles are being installed in support of upcoming deployments.

LCS 19 is the tenth Freedom-variant LCS designed, built and delivered by the Lockheed Martin-led industry team and will be commissioned in Pensacola, Florida, this summer.

Photo and video assets of LCS 19's December Acceptance Trials are available below: