PALMDALE, Calif., Nov. 7, 2019 /PRNewswire/ -- Lockheed Martin (NYSE: LMT) and the Ronald Reagan Presidential Foundation and Institute are partnering on a permanent static display for the F-117 Nighthawk that bears the nickname "Unexpected Guest." The display will be debuted at a ribbon cutting ceremony during the Reagan National Defense Forum on Dec. 7. 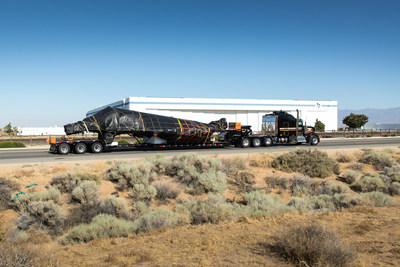 The joint project referred to as "Operation Nighthawk Landing" was made possible by a permanent loan to the Reagan Foundation from the National Museum of the U.S. Air Force. To support the Air Force in their loan, the Lockheed Martin Skunk Works® is restoring the aircraft in preparation for its permanent exhibition at the Reagan Library.

"The F-117 Nighthawk reminds us of our country's ability to rapidly develop disruptive technology critical to national security," said Michele Evans, executive vice president of Lockheed Martin Aeronautics. "Lockheed Martin is proud to partner with the Air Force and the Reagan Foundation to install a permanent symbol of American innovation at the Reagan Library for all to see."

F-117 #803's nickname "Unexpected Guest" alludes to the extreme secrecy that surrounded the F-117 Nighthawk program as well as the stealth aircraft's ability to go undetected by enemy radar. This fitting nickname was inspired by the 1982 heavy metal album "Unexpected Guest" by the band Demon.

Developed in complete secrecy by Lockheed Martin Skunk Works, the F-117 was the world's first operational stealth aircraft. Deemed impossible, it is a tangible reminder of what can be achieved through teamwork, passion and determination.

About the Ronald Reagan Presidential Foundation & Institute
The Ronald Reagan Presidential Foundation and Institute is the nonprofit organization created by President Reagan himself and specifically charged by him with continuing his legacy and sharing his principles - individual liberty, economic opportunity, global democracy and national pride. The Foundation is a non-partisan organization which sustains the Ronald Reagan Presidential Library and Museum in Simi Valley, CA, the Reagan Center for Public Affairs, the Presidential Learning Center, The Air Force One Pavilion and the award-winning Discovery Center, as well as the Reagan Institute, which carries out the Foundation's work in Washington, D.C. The Reagan Library houses over 55 million pages of Gubernatorial, Presidential and personal papers and over 60,000 gifts and artifacts chronicling the lives of Ronald and Nancy Reagan. It also serves as the final resting place of America's 40th President and his First Lady. www.reaganfoundation.org