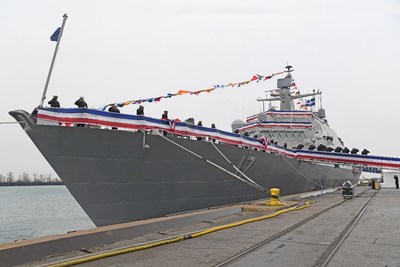 "Indianapolis' speed, flexibility and lethality bring a unique set of capabilities to the fleet," said Joe DePietro, vice president and general manager of Small Combatants and Ship Systems at Lockheed Martin. "She is equipped and ready for today's threats and can easily integrate new capabilities for tomorrow's threats. Our team is confident Indianapolis will be what the Navy needs when the fleet needs it."

Unique among combat ships, the focused-mission LCS is designed to support mine countermeasures, anti-submarine and surface warfare missions and is easily adapted to serve future and evolving missions. The Freedom-variant LCS is:

"The crew gives the ship its own personality and warfighting spirit. The men and women of USS Indianapolis exemplify patriotism, grit, and what this great country of ours stand for," said LCS 17's Commanding Officer, Commander Colin Kane. "I am extremely proud to have all of [the USS Indianapolis crew] as shipmates."

There are seven ships in various stages of production and test at Fincantieri Marinette Marine in Wisconsin, where the Freedom-variant LCS is built. The next Freedom-variant in the class is LCS 19, the future USS St, Louis, which is on track to begin sea trials later this year.

"On behalf of the proud 2,000 men and women who transform flat steel into a fast, agile surface combatant," said Jan Allman, CEO of Fincantieri Marinette Marine, "we are honored to support the U.S. Navy, and we congratulate the outstanding crew of the USS Indianapolis."

About Lockheed Martin
Headquartered in Bethesda, Maryland, Lockheed Martin Corporation is a global security and aerospace company that employs approximately 105,000 people worldwide and is principally engaged in the research, design, development, manufacture, integration and sustainment of advanced technology systems, products and services.