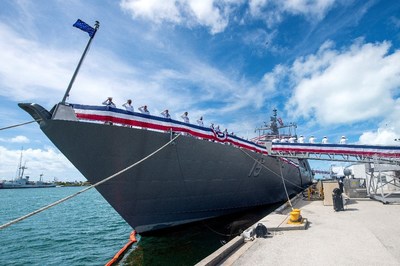 "Billings was designed to operate and adapt to a rapidly changing environment," said Joe DePietro, vice president of Small Combatants and Ship Systems at Lockheed Martin. "She is equipped and ready for today's threats and easily modifiable to meet the threats we may not even be aware of yet. Our team is confident Billings will be what the Navy needs when the fleet needs it."

"Having now commanded two freedom class LCS variants, I would like to report that these ships are truly impressive and will fit well in the niche they have been designed for," said LCS 15's Commanding Officer, Commander Nathan Rowan. "They are fast, maneuverable, and their weapon systems are some of the most accurate I've witnessed on any platform of which I've previously served."

There are seven ships in various stages of production and test at Fincantieri Marinette Marine in Wisconsin, where the Freedom-variant LCS is built. The next Freedom-variant in the class is LCS 17, the future USS Indianapolis, which was delivered in late July.

"On behalf of the proud 2,000 men and women who transform flat steel into a fast, agile surface combatant," said Jan Allman, CEO of Fincantieri Marinette Marine, "we are honored to support the U.S. Navy, and we congratulate the outstanding crew of the USS Billings."