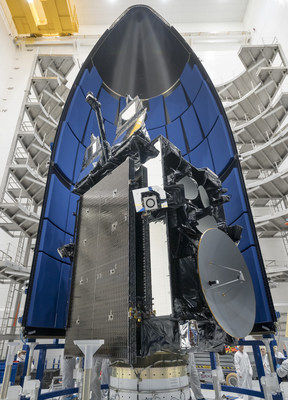 The AEHF system provides global, survivable, highly secure and protected communications for strategic command and tactical warfighters operating on ground, sea and air platforms. The satellite will now move into a testing phase prior to hand over to the Air Force. With four satellites in orbit, the AEHF constellation completes a geostationary ring and will be able to deliver global coverage.

"It's good to return with our mission partners to see the culmination of expertise, skill and partnership that we have worked diligently toward to make this AEHF launch a success," said Mike Cacheiro, vice president of Protected Communication Systems at Lockheed Martin. "This is a substantial milestone for AEHF, and as we look ahead, we continue to improve and upgrade this mission to deliver these vital communications capabilities to the Air Force."

AEHF also serves international partners including Canada, the Netherlands and the United Kingdom.

Lockheed Martin is on contract with the Air Force to deliver the fifth and sixth satellites and upgraded the Mission Planning ground system. Lockheed Martin contributed payload system engineering, mission control ground software, solar arrays and the LM A2100 spacecraft bus, which is a dependable and low-risk platform for commercial, civil and military satellites. All AEHF satellites are assembled at the company's Sunnyvale, Calif. facility.

Headquartered in Bethesda, Maryland, Lockheed Martin is a global security and aerospace company that employs approximately 100,000 people worldwide and is principally engaged in the research, design, development, manufacture, integration and sustainment of advanced technology systems, products and services. This year the company received three Edison Awards for ground-breaking innovations in autonomy, satellite technology and directed energy.