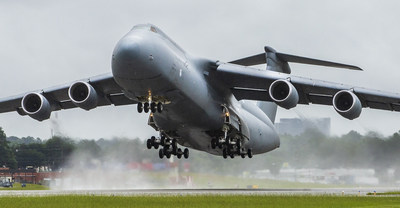 The delivery completes the RERP upgrade, which extends the service life of the C-5 fleet out until the 2040s.

"With the capability inherent in the C-5M, the Super Galaxy is more efficient and more reliable, and better able to do its job of truly global strategic airlift," said Patricia Pagan, Lockheed Martin Air Mobility and Maritime Missions Strategic Airlift director, "I am very proud of the contractor-government team than carried out the C-5 fleet modernization effort. We've worked very hard to ensure the C-5Ms are the absolute best strategic airlifters possible for our armed forces."

An Air Force Reserve Command aircrew from the 439th Airlift Wing at Westover Air Reserve Base, Massachusetts, ferried the final C-5M to Stewart Air Force Base, New York, where the aircraft will undergo interior paint restoration. Once that work is complete, the aircraft will be flown to Westover where it will be the eighth C-5M assigned to the base.

The heart of the system is the GE F138 turbofan engine (known as a CF6-80C2L1F in the commercial world) de-rated to 50,000 pounds of thrust on the C-5M. This engine provides 22 percent more thrust than the out-of-production TF39 turbofans on the earlier C-5A/B/C aircraft. The engines also allow the C-5M to meet the FAA's Stage 4 noise reduction requirements.

First flight of a modified aircraft to the C-5M standard came in Marietta, Georgia, on June 19, 2006. The first operational C-5M was delivered to Dover Air Force Base, Delaware, on February 9, 2009. A total of 49 C 5Bs, two C-5C aircraft, and one original C-5A was modified under RERP.

The C-5M holds 89 FAI-certified world aviation records, the most by any aircraft type. These records include time-to-climb with payload, altitude with payload, and greatest payload carried.

The C-5 Galaxy has been operated solely by the U.S. Air Force since 1970 and is the largest strategic airlifter in the U.S. Air Force's fleet. The C-5 is capable of carrying two 78-ton M1A1 main battle tanks or helicopters and other large equipment intercontinental distances. Fully loaded, a C-5 has a gross weight of more than 800,000 pounds. All of the C-5s were built at Lockheed Martin's Marietta site.

In addition to Westover, C-5Ms are assigned to active duty and Air Force Reserve Command units at Dover Air Force Base, Delaware (436th and 512th Airlift Wings) and Travis Air Force Base, California (60th and 349th Air Mobility Wings). The C-5 aircrew training squadron is part of the 433rd Airlift Wing, the Reserve wing at Joint Base San Antonio-Lackland, Texas. 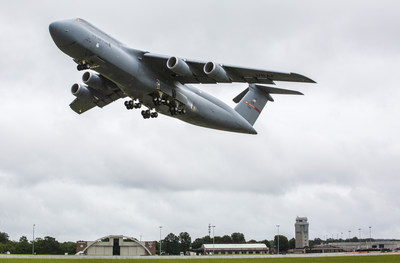