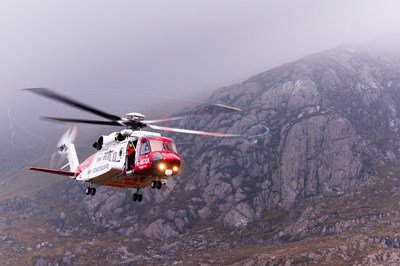 The relationship between Sikorsky and the MCA dates back to 1983 when the MCA, through Her Majesty's Coastguard, began operating the Sikorsky S-61 helicopter. The HM Coastguard fleet currently includes 12 Sikorsky S-92® aircraft operating from Newquay, Caernarfon, Sumburgh, Stornoway, Humberside and Inverness. Since April 2015, the MCA has utilized its S-92 fleet to conduct 4,500 search and rescue missions.

"Sikorsky is honored to be a part of the MCA's mission for the past 35 years and is proud that the S-92 plays such a critical role in providing a safe, efficient and reliable aircraft with which to save lives," said Lockheed Martin's Rotary and Mission Systems Executive Vice President Dale Bennett. "With Sikorsky a part of Lockheed Martin, our focus is to fully support all our commercial helicopter customers and their missions."

"I am very proud of the partnership we have with Sikorsky which has developed over the last 35 years," said Damien Oliver, MCA Aviation Programme Director. "Sikorsky's aircraft offer the very best in search and rescue capabilities, without which our crews across the UK could not deliver a first-class search and rescue helicopter service, saving the lives of those in difficulty at sea, in coastal areas and inland throughout the UK."

The ceremony included honoring recent lifesaving efforts by the HM Coastguard helicopter crew at Inverness. The Sikorsky Winged-S Rescue Award is bestowed upon those who perform a lifesaving rescue with a Sikorsky aircraft.

In June 2018, two boys were winched to safety by a four-person HM Coastguard crew operating an S-92 helicopter. The boys, ages 11 and 14, were swimming in the ocean when the tide began to rise and they found themselves unable to swim back to shore.

The boys were able to climb atop an offshore rock formation as the rising tide threatened to submerge the rocks. A concerned citizen spotted the boys and notified HM Coastguard.

The Inverness-based crew responded within three minutes and winched the boys safely to the nearby beach.

The Rescue Award is the 50th presented to the MCA by Sikorsky.