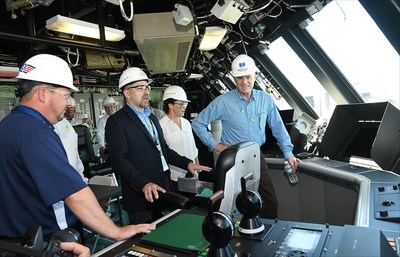 "It is truly great to see what is being produced up here with the American worker," Secretary Spencer said during a shipyard tour. "We're producing a ship that based on price is exceptional. We're also going to increase the capabilities of these ships and they're going to be an integral part of the small surface combatants."

Spencer visited to view the modernized production line and tour LCS 13, the future USS WICHITA. Over the past 10 years, the Freedom-variant industry team invested more than $120 million to modernize the shipyard, hire more than 1,000 people and train a new workforce. This private investment optimized the shipyard for serial production at a rate of two Littoral Combat Ships per year.

The Lockheed Martin-led LCS team is comprised of shipbuilder Fincantieri Marinette Marine, naval architect Gibbs & Cox, and more than 800 suppliers in 42 states. The LCS is the Navy's most affordable surface combatant shipbuilding program.