BETHESDA, Md., April 6, 2018 /PRNewswire/ -- Lockheed Martin is working on technologies that will make deep-space travel possible, such as building the spacecraft that will go to Mars. As part of its Generation Beyond K-12 science, technology, engineering and math (STEM) education initiative, the company today announced the winners of a nationwide contest asking students to design a Mars-orbiting science lab and living space (or Mars Base Camp Habitation Module) that will dock with NASA's Orion deep space spacecraft. 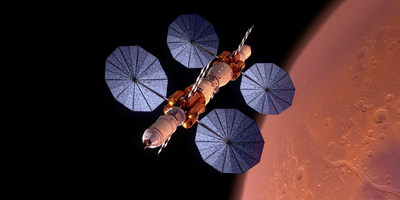 A roundtrip to Mars will take up to three years. In addition to basic necessities such as food, water, oxygen and power, astronauts will need a habitat in which they can live comfortably and safely. The contest asked middle schoolers to submit their best design ideas for a Habitation Module that will provide all of the systems and living spaces that a crew needs for a long mission.

The individual winner is from East Prairie Elementary School in Skokie, Illinois and the team winners are from Stoller Middle School in Portland, Oregon. Their winning entries are available at: https://www.generationbeyondinschool.com/competition/video/archives.

"Lockheed Martin is already developing design concepts for a Mars Habitat, and the 2017 Generation Beyond Video Challenge Contest was a great opportunity to hear innovative new ideas from the next generation of engineers, builders and explorers who will help us get there," said Tony Antonelli, a former NASA space shuttle pilot who heads advanced civil space programs for Lockheed Martin. "The goal of Generation Beyond is to spark student interest in STEM, and this contest is one of many ways we're using exciting topics, like space travel, to engage students in learning."

The Habitation Module is a component of Mars Base Camp, which is Lockheed Martin's vision for the spacecraft that could one day take astronauts to the red planet. The Mars Base Camp concept would transport astronauts from Earth, via an orbiting gateway at the Moon, to a Mars-orbiting science laboratory where they can perform real-time scientific exploration, analyze Martian rock and soil samples, and confirm the ideal place to land humans on the surface in the 2030s.

Along with hosting video challenge contests in 2016 and 2017, the Generation Beyond program includes a curriculum, created in partnership with Discovery Education, that has been used in thousands of classrooms around the country and incorporates lesson plans and interactive content. Lockheed Martin also created an app called Mars Walk that simulates what it's like to explore the surface of Mars. Classroom resources are available at generationbeyondinschool.com and the Mars Walk app is available for download on iPhone or Android.

About Lockheed Martin:
Headquartered in Bethesda, Maryland, Lockheed Martin is a global security and aerospace company that employs approximately 100,000 people worldwide and is principally engaged in the research, design, development, manufacture, integration and sustainment of advanced technology systems, products and services.