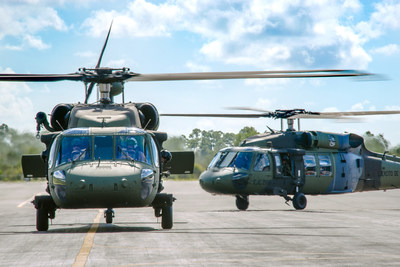 "We congratulate and thank the 11 government agencies and armed forces across Argentina, Brazil, Chile, Colombia, and Mexico for showing the world how to adapt and operate the Black Hawk helicopter for critical missions that serve and protect their citizens," said Adam Schierholz, Sikorsky regional executive for Latin America. "Continued confidence in the Black Hawk by these countries during the past three decades stems from the aircraft's unequaled rugged military design, which translates to predictable reliability and performance in flight, effectiveness in combat, and the availability of strong product support to ensure high operational readiness."

"The Black Hawk has proven to be a unique and strategic tool for the Colombian Air Force that has allowed us to perform some of the most challenging missions in very extreme conditions," said Gen. Carlos Eduardo Bueno, Chief of the Colombian Air Force. "We join in celebrating this milestone anniversary, and look forward to many more years of effective utilization of these fine machines with the help and support of our friends at Sikorsky."

Since 1988, Sikorsky has delivered 174 Hawk aircraft to the region, which includes six Seahawk® variants to the Brazil Navy. The total will climb to 180 during 2018 when the Chilean Air Force takes delivery of six S-70i Black Hawk aircraft for military and humanitarian missions.

A Look Back
Country-specific operations include:

A Look Ahead
Sikorsky continues to build UH-60M Black Hawk aircraft for the U.S. Army, which is expected to operate the platform into the 2070s. In March, Sikorsky began production of the HH-60W Combat Rescue Helicopter designed for long-distance missions.

Sikorsky continues to build the S-70i, a digital Black Hawk variant customized to the preferences of international militaries.

In 2018, Sikorsky will field two new mission capabilities for the Black Hawk:

Further out, Sikorsky is developing an optionally piloted capability for the digital Black Hawk with the intelligence and autonomy to carry out missions with two, one or zero crew on board.