RIGA, Latvia and SYRACUSE, N.Y., March 12, 2018 /PRNewswire/ -- Lockheed Martin (NYSE: LMT) recently completed a successful site acceptance test of a TPS-77 Multi-Role Radar (TPS-77 MRR) marking an on-time delivery of the first of three radars to the Ministry of Defense of the Republic of Latvia, and a major step forward in strengthening Latvia's national defense. 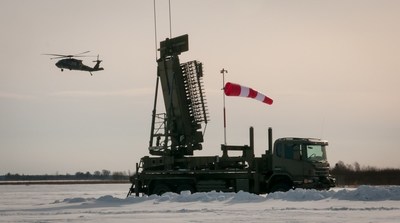 The TPS-77 MRR plays a vital role in improving the Latvian Air Force's airspace defense by increasing its low-level flight surveillance and identification capabilities, leading to enhanced early warning and situation awareness that allows its armed forces to make more informed and efficient decisions in response to modern day threats.

This milestone is the most recent event in a 16-year partnership of radar development and training between Latvia and Lockheed Martin, including the 2015 contract for three TPS-77 MRRs.

"Acquisition of the TPS-77 MRR is a huge investment in the strengthening of combat capabilities of the National Armed Forces, enabling the Latvian army to address current security challenges with appropriate response tools. Surveillance, especially low-level flight surveillance and identification is a vital part of Latvian airspace surveillance capabilities. New MRR technology is compatible with other types of radars used by other countries," emphasizes Latvia's Minister for Defence, Raimonds Bergmanis.

The TPS-77 MRR is the latest version in Lockheed Martin's successful product line of surveillance radars and was developed in response to the evolving needs of armed forces on the battlefield. The radar's multi-role single scan technology allows operators to select multiple missions for the radar at a single time, such as long range or medium range low-level flight surveillance. As the radar rotates through each 360-degree scan, the system automatically adjusts to the selected mission. Changes can be easily made if the system is moved or mission is changed. Once set, no further operator inputs are required.

The TPS-77 MRR is designed for ultra-low power consumption and is the most transportable version of Lockheed Martin's successful TPS-77 product line. Latvia's variant of this high-performing radar can be truck mounted for operation at remote sites or dismounted for use at fixed sites.

As part of the TPS-77 MRR program, Lockheed Martin has engaged with local Latvian industry for procurement and production. These relationships will form the basis for long-term local maintenance and support of the new systems.

"The Latvian industry has been an important partner during the development and production of the Lockheed Martin TPS-77 MRRs. This support will help strengthen Latvia's Industrial Capability," said Rick Cordaro, program director, Lockheed Martin Ground Based Radar

Lockheed Martin has produced and maintains more than 180 surveillance-range radars, all of which are operational around the world detecting targets at ranges up to 250 miles, 24 hours a day. There are three previously installed Lockheed Martin TPS-77 radars in Latvia, positioned in Čalas, Lielvārde and Audriņi. These radars can operate completely unmanned and many have performed for decades in remote, inhospitable areas and in a wide range of operational environments.