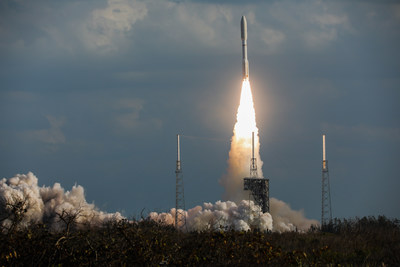 NOAA's next weather satellite in the Geostationary Operational Environmental Satellite – R Series, GOES-S, which will be renamed GOES-17 upon reaching geostationary orbit, will be positioned to boost forecast accuracy for the West Coast, Alaska and Hawaii. With data from GOES-17, and the already operational GOES-16, the two satellites will observe most of the Western Hemisphere. These satellites will continue to deliver dazzling weather data that has captivated forecasters such as first-of-its-kind lightning mapping and high-definition views of weather systems. This sophisticated information will support short-term weather forecasts and severe storm warnings, maritime forecasts, and space weather predictions. Additionally, the technology will improve hurricane tracking and intensity forecasts, increase thunderstorm and tornado warning lead time and improve wildfire detection.

"GOES-S increases the coverage of our nation and will contribute to the quality and timeliness of weather data – but it is also more than that." said Tim Gasparrini, GOES-R vice president and program manager at Lockheed Martin Space. "As is evident with the performance of GOES-16 on orbit, we are gaining insight into our weather like never before. The extended application of this data is expected to have a large impact on industries like shipping and logistics, aviation, transportation and more."

Lockheed Martin designed, built and tested the satellite and is responsible for spacecraft launch processing. In addition to all four GOES-R Series satellites (R, S, T and U), Lockheed Martin also designed and built the Solar Ultraviolet Imager (SUVI) and the Geostationary Lightning Mapper (GLM) instruments that will fly aboard each spacecraft.