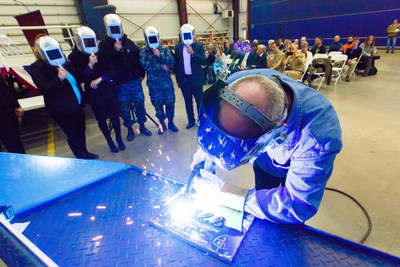 Ship sponsor Jodi Greene completed the time-honored tradition and authenticated the keel by welding her initials onto a steel plate that will be placed in the hull of the ship.

"It is a tremendous honor to serve as the sponsor of the future USS Minneapolis-Saint Paul," Greene said. "I look forward to supporting the ship and its crew throughout the building process and the life of the ship. I know the people of Minneapolis and Saint Paul will proudly support her when she is commissioned and officially enters the Navy fleet."

The Lockheed Martin and Fincantieri Marinette Marine team is currently in full-rate production of the Freedom-variant of the LCS, and has delivered five ships to the U.S. Navy to date. The future USS Minneapolis-Saint Paul is one of eight ships in various stages of construction at Fincantieri Marinette Marine, with one more in long-lead production.

"We are proud to build another proven warship that allows our Navy to carry out their missions around the world," said Joe DePietro, Lockheed Martin vice president of small combatants and ship systems. "We look forward to working with the U.S. Navy to continue building and delivering highly capable and adaptable Freedom-variant Littoral Combat Ships to the fleet."

LCS 21 will be the second vessel named for the Twin Cities. SSN-708, a Los Angeles-class submarine, served as the first USS Minneapolis-Saint Paul and was decommissioned in 2008. Her name honors the Twin Cities' patriotic, hard-working citizens for their support of the military.

About Fincantieri Marinette Marine
Founded in 1942, Fincantieri Marinette Marine (FMM) is located on the Menominee River flowage into Green Bay. The largest shipyard in the Midwest, FMM has delivered more than 1,300 vessels to the U.S. Navy, U.S. Coast Guard, and commercial customers, including the technologically advanced Littoral Combat Ship Freedom variant for the U.S. Navy. In 2008, FMM along with several sister shipyards also based in the Great Lakes region, became part of Fincantieri, one of the world's largest shipbuilding groups and number one by diversification and innovation, with more than 19,400 employees, of whom more than 8,200 in Italy, 20 shipyards in 4 continents. Fincantieri operates in the United States through its subsidiary Fincantieri Marine Group, serving both civilian and government customers. Over the past five years, Fincantieri invested more than $100 million in both capital infrastructure and its resources to support FMM's transformation into what is now one of the best shipyards in the United States. Employing approximately 1,500 employees, today FMM is a state-of-the-art, full service new construction shipyard.