STRATFORD, Conn., Feb. 20, 2018 /PRNewswire/ -- Sikorsky, a Lockheed Martin (NYSE: LMT) company, is beginning final assembly of the first HH-60W Combat Rescue Helicopter, which will bring unprecedented capability enhancements to the U.S. Air Force rescue mission. The timing of final assembly supports the program's accelerated schedule and positions the aircraft's first flight for the end of this year, two months ahead of schedule. 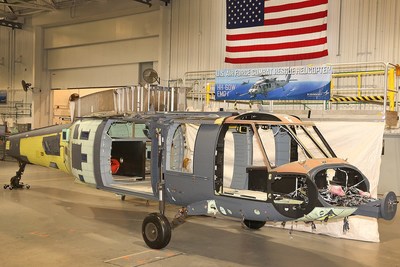 "Final assembly of this first HH-60W helicopter marks a significant milestone for Sikorsky, our workforce and the U.S. Air Force," said Tim Healy, director of Sikorsky Air Force Programs. "We are on track to deliver this significant capability enhancement ahead of schedule, ensuring the U.S Air Force continues its mission 'That Others May Live.'"

"The HH-60W will be the most thoroughly networked and connected vertical lift platform ever produced, bringing unrivaled capability in high-threat environments," said Healy. "The modern battlespace is an unforgiving place, no one survives on their own, and the HH-60W allows the entire suite of air and space power to be linked and employed in support of combat rescue operations, even in deep and denied territory."

This Engineering Manufacturing Development (EMD) aircraft is the first to be assembled at the Sikorsky headquarters in Stratford, Connecticut. A total of nine aircraft will be built in Connecticut during the EMD phase of the program ― four EMD aircraft and five System Demonstration Test Articles (SDTA).

The $1.5 billion EMD and SDTA contract includes development and integration of the next generation combat rescue helicopter and mission systems, including delivery of nine HH-60W helicopters as well as six aircrew and maintenance training devices, and instructional courseware designed specifically for the HH-60W aircraft. Sikorsky successfully conducted the training systems design review in September.