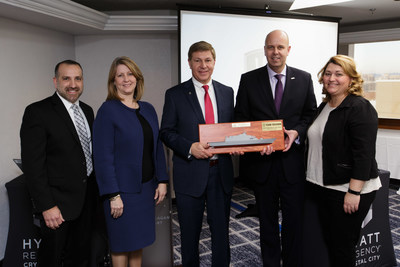 "Rolls-Royce has been an excellent partner, repeatedly demonstrating its value to the program and our U.S. Navy customer," said Joe DePietro, Lockheed Martin vice president of small combatants and ship systems. "As an original member of Team Freedom, Rolls-Royce has played an important role in our program's success, and we look forward to continuing our successful partnership with Rolls-Royce in the years to come."

Rolls-Royce played a critical role in the USS Little Rock's acceptance trials – the best of the class to date. During the trials, Rolls-Royce demonstrated reliability and performance improvements on the ship's propulsion and steering systems. These modifications helped enable USS Little Rock to achieve the highest propulsion system scores to date and conduct a clean sweep of the ship's sea trials major demonstrations.

"It is our privilege to work on the Lockheed Martin Littoral Combat Ship program and we are deeply honored by this recognition," said Don Roussinos, Rolls-Royce, President-Naval. "The combination of the MT30 gas turbine and our latest waterjet technology will ensure these ships are at the cutting edge of global naval capability for many years to come. It's especially fitting to receive this prestigious award in 2018, ten years after the first MT30 powered ship, USS Freedom, was commissioned."