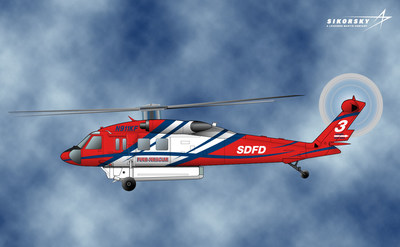 A Firehawk helicopter performs aerial firefighting and additionally, can plan missions and direct other firefighting aircraft, and provide emergency medical service transport, search and rescue, and logistic support. Once modified by a specialist outfitter in 2018, it will be equipped with a 1,000-gallon (3,785-liter) water tank, extended landing gear, single pilot cockpit layout and a medically-equipped interior.

The Firehawk™ configuration of the Black Hawk is the most capable multi-mission, firefighting helicopter available, with proven military grade capabilities, said Brian Fennessy, Fire Chief for the City of San Diego. "Fires are spreading faster and getting larger. The need for aircraft to carry more water has become critical."

"When configured for its aerial firefighting mission, the Firehawk helicopter will give the City of San Diego a state-of-the-art platform proven to fight fires from the air and perform other life-saving missions," said Dan Schultz, president of Sikorsky. "This aircraft's military pedigree, unique equipment and advanced onboard systems will enable San Diego to perform these high endurance missions with safety and reliability. Welcome San Diego firefighters to the Sikorsky helicopter family."

"As wildfires continue to ravage our state, we must do everything in our power to make sure the San Diego region is as prepared as possible for the next major fire," said Mayor of San Diego Kevin L. Faulconer. "We must continue to ensure our firefighters have the most advanced tools at their disposal to keep San Diegans safe. This new Firehawk helicopter is going to take our aerial firefighting capabilities to the next level."

Sikorsky supports the critical mission of the City of San Diego Fire Department with an all new S-70i Black Hawk aircraft, available direct from Sikorsky in the U.S. Customers can order aircraft with mission specific kits and accessories customized to specific preferences.  The City of San Diego will become the second jurisdiction to order the Firehawk this year after an order for two S-70 aircraft from the Los Angeles County Fire Department.

Black Hawk is a registered trademark of Sikorsky, a Lockheed Martin Company.