MADRID, Oct. 26, 2017 /PRNewswire/ -- In 2017, we celebrate the 20th anniversary of a successful agreement: the collaboration of Navantia and Lockheed Martin (NYSE: LMT) to supply the Spanish Navy with the Aegis Combat System for the F-100 frigates. 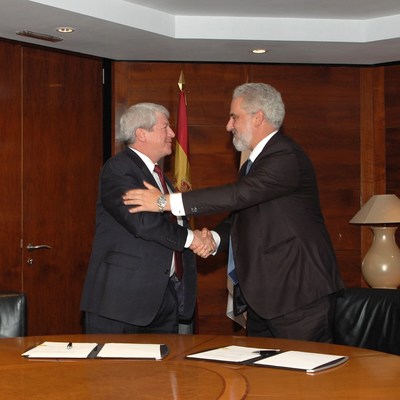 The F-100 was the first frigate to incorporate the Aegis Combat System from Lockheed Martin in a ship of less than 9,000-tons. Thanks to this collaboration, the Spanish Navy now operates state-of-the-art oceanic escorts, optimized to act as command ships in conflict scenarios, trained to provide full coverage to expeditionary forces, with high anti-air warfare capability, total integration with the most advanced units of our allied nations, as well as a successful case of industrial cooperation, with a combat management system developed by Navantia and the integration of Spanish sensors and weapons.

Between 2000 and 2010, Lockheed Martin and Navantia delivered four F-100 frigates to the Spanish Navy, and in 2013 a fifth and final was commissioned. It wasn't long before the rest of the world took notice; in 2000, the Royal Norwegian Navy selected Navantia to develop and build five Fridtjof Nansen-class frigates, the last one of which launched in 2009. After the Norwegian frigates, the Australian Hobart class was designed, based on the F-100 with an updated Aegis Combat System configuration, the first of which was delivered to the Royal Australian Navy in September.

Today, 11 frigates developed by Navantia and Lockheed Martin sail around the globe completing missions that ensure safety and freedom. On the solid foundation of this partnership, both companies are developing the frigates of the next generation for the Spanish Navy: the F-110, and collaborating in other commercial opportunities around the globe.

"The fundamental openness, trust, and transparency between Lockheed Martin and Navantia laid a tremendous foundation 20 years ago to build a world-class capability for the Spanish Navy, the Royal Norwegian Navy, and the Royal Australian Navy," said Michele Evans, Lockheed Martin Vice President, Integrated Warfare Systems and Sensors. "Today, the future remains bright as we look across the world and continue to expand Aegis alongside the tremendous shipbuilding capability that Navantia brings."

To honor the success of this 20 year partnership and emphasize its bright future ahead, Lockheed Martin and Navantia have signed a renewed Memorandum of Agreement between the companies to collaborate to explore mutually beneficial new business opportunities in the areas of surface ships and naval combat systems.

"With the success of the F-100, Fridtjof Nansen, and Hobart programs in our sails and F-110 just in front of us, we are excited to see what the next 20 years of this great partnership between two world-class companies can offer," Navantia Vice President, Sofia Honrubia said.

About Navantia
The Spanish shipbuilder Navantia, is a world reference in the design, construction and integration of state-of-the-art war ships, as well as ship repairs & modernizations.  It is also engaged in the design and manufacture of Integrated Platform Management Systems, Fire Control Systems, Command and Control systems, Propulsion Plants and through life support for all its products. Even though its main line of activity is in the naval field, Navantia designs and manufactures systems for the Army and the Air Force.