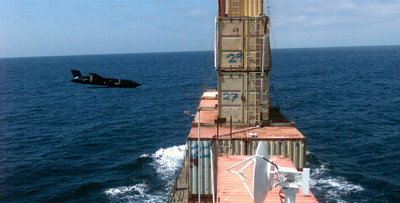 "This award highlights LRASM's accomplishments and the technology breakthroughs that Lockheed Martin brings to our customers," said Alan Jackson, vice president of Strike Systems at Lockheed Martin Missiles and Fire Control. "We are developing next-generation technologies to keep our enemies at bay and make our world a safer place to live."

Each year, the editors of Popular Science review thousands of products in search of the top 100 tech innovations of the year – breakthrough products and technologies that represent a significant leap in their categories. The Best of What's New awards are presented to 100 new products and technologies in 11 categories: Automotive, Aerospace, Engineering, Entertainment, Gadgets, General Innovation, Security, Software, Home, Health and Recreation.

Those in the Security category promote safety and can include military and law-enforcement technology, home security products and surveillance devices.

"The Best of What's New awards honor the innovations that shape the future," said Joe Brown, editor-in-chief of Popular Science. "From life-saving technology to incredible space engineering to gadgets that are just breath-takingly cool, this is the best of what's new."

LRASM is designed to detect and destroy specific targets within groups of ships by employing advanced technologies that reduce dependence on intelligence, surveillance and reconnaissance platforms, network links and GPS navigation in contested environments. LRASM will play a significant role in ensuring military access to operate in open ocean/blue waters, owing to its enhanced ability to discriminate and conduct tactical engagements from extended ranges.

LRASM is a precision-guided, anti-ship standoff missile based on the successful Joint Air-to-Surface Standoff Missile - Extended Range (JASSM-ER). It is designed to meet the needs of U.S. Navy and Air Force warfighters in contested environments. The air-launched variant provides an early operational capability for the U.S. Navy's offensive anti-surface warfare Increment I requirement to be integrated onboard the U.S. Air Force's B-1B in 2018 and on the U.S. Navy's F/A-18E/F in 2019.