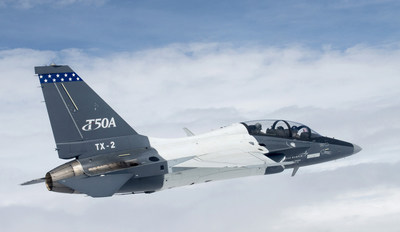 Flight operations began at the Greenville site in November 2016 as the team worked toward a March 2017 proposal deadline and submission of the required flight test data at the end of June.

"We've met the U.S. Air Force flight test requirements for the proposal, however our flight operations team continues to produce a regular rhythm of sorties to keep the pilots proficient, the aircraft operational and ensure we're prepared to ramp up operations on day one of a decision," said Doug Batista, T-50A program director.

In February 2016, Lockheed Martin announced its plans to offer the T-50A in the APT competition and build the aircraft at a final assembly and checkout (FACO) facility in Greenville. Lockheed Martin formally unveiled its T-50A FACO and operations center in August 2016.

The T-50A is ready on day one of contract award and is purpose-built around 5th Generation thinking. It will train the F-22 Raptor and F-35 Lightning II pilots of tomorrow, as well as pilots for frontline 4th Generation aircraft. The T-50A builds upon the proven heritage of the T-50 family of aircraft with more than 150 T-50s flying today – 150,000 flight hours and counting – and more than 2,000 pilots who have trained in this aircraft.