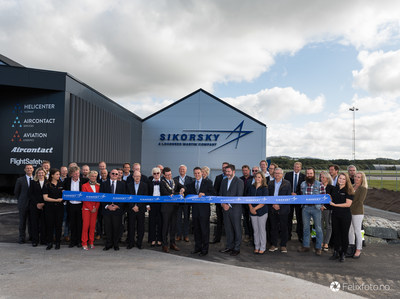 Since beginning to serve Scandinavian operators in September 2016, the FSL has averaged a response time of less than one hour for requests for parts. More than 1,300 various part numbers for S-92 helicopters are stocked in Norway.

"The Forward Stocking Location in Stavanger is an important development in parts support to further increase our aircraft availability," said Bristow Norway Area Manager, Heidi Wulff Heimark. "We have already benefited considerably in reducing down time. Having parts so close to where we operate improves our ability to react more effectively to unexpected and disruptive repairs that require parts, improving both our safety and operations."

"The Sikorsky stocking locations in Aberdeen and Stavanger have been great assets in helping us reduce Aircraft on Ground downtime through placing critical parts within and close to our large operating regions," said Dave Balevic, senior vice president of engineering and operations at CHC Helicopter. "Because we no longer have to wait for parts to cross the Atlantic, we now potentially reduce AOG event downtime by as much 50-60 percent just by having the right part in the right place."

The Stavanger site is one of four Sikorsky FSLs positioned to provide close support for commercial customers. The other sites are in Brisbane, Australia; Aberdeen, Scotland; and Rio de Janeiro, Brazil. Additionally, Sikorsky has authorized 20 Customer Support Centers worldwide and is continuing to expand its service capabilities to where customers operate. Customer Support Centers enable quick access to Sikorsky's logistics and spare parts inventory for operators, and provide advanced service capabilities.