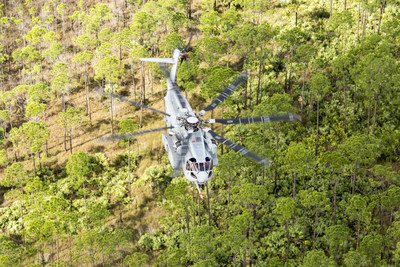 "Gaining the U.S. Marine Corps approval to enter into production and the award of the first contract are milestones made possible by the tremendous achievements of the joint Sikorsky, Naval Air Systems Command (NAVAIR) and U.S. Marine Corps team," said Dr. Mike Torok, vice president, CH-53K programs. "This is what we have been striving for - to deliver this amazing capability to the U.S. Marine Corps."

Under the $303,974,406 contract, Sikorsky will deliver two production aircraft to the U.S. Marine Corps in 2020 along with spares and logistical support. Aircraft assembly will take place at Sikorsky's headquarters in Stratford, Connecticut.

"We have just successfully launched the production of the most powerful helicopter our nation has ever designed. This incredible capability will revolutionize the way our nation conducts business in the battlespace by ensuring a substantial increase in logistical through put into that battlespace. I could not be prouder of our government-contractor team for making this happen," said Col Hank Vanderborght, U.S. Marine Corps program manager for the Naval Air Systems Command's Heavy Lift Helicopters program, PMA-261.

The U.S. Department of Defense's Program of Record remains at 200 CH-53K aircraft. The U.S. Marine Corps intends to stand up eight active duty squadrons, one training squadron, and one reserve squadron to support operational requirements.