HUNTSVILLE, Ala., Aug. 7, 2017 /PRNewswire/ -- Lockheed Martin will unveil its next generation air and missile defense radar demonstrator at the annual Space & Missile Defense Symposium this week in Huntsville, Alabama. The active electronically scanned array (AESA) Radar for Engagement and Surveillance (ARES) is a representative full-scale prototype of the technology to support a modern, 360-degree capable sensor that the U.S. Army will use to address current and emerging air and ballistic missile threats. 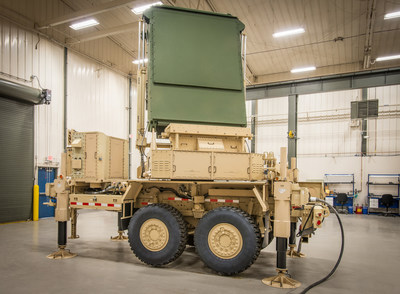 This fractional array is representative of Lockheed Martin's potential Lower Tier Air & Missile Defense Sensor solution, built on a modular and scalable architecture to scale to the Army's requirements, once finalized, to replace the aging Patriot MPQ-65 radar. The array on display in Huntsville will be used to mature technology and verify performance to ensure uniform 360 degree threat detection and system performance.

"Incremental upgrades to the existing Patriot radar no longer address current sustainment issues, current threat performance shortcomings, or provide growth for future and evolving threats," said Mark Mekker, director of next generation radar systems at Lockheed Martin. "Lockheed Martin is prepared to offer a next generation missile defense system that will leverage advances in radar technology to provide a modular, scalable architecture and reduce the total cost of ownership well over its 30 year lifecycle."

View a brief video of the demonstrator.

The AESA technology is also in use in the AN/TP/Q-53 radar system, which Lockheed Martin designed, developed and delivered to the Army on an urgent need timeline in under 36 months, and which continues to be scaled to address emerging threats.

"Our solution for the U.S. Army's new air and missile defense sensor is not a new-start program. It's a combination of technology maturation over several years and includes capability leveraged from our current development programs and battlefield-proven radars. We rely heavily on our modern radar systems such as the Q-53 and the Long Range Discrimination Radar to rapidly bring low-risk, proven technology to the warfighter," Mekker said. "We look forward to the opportunity to participate in this competition that will ultimately drive up performance and reduce costs for the U.S. Army."