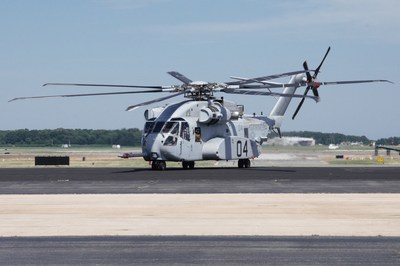 "This first movement of CH-53K flight testing to our customer's facility denotes that the aircraft have achieved sufficient maturity to begin transitioning the focus of the test program from envelope expansion to system qualification testing," said Dr. Michael Torok, Sikorsky Vice President, CH-53K Programs. "This has been the plan from the beginning and is another important step toward getting these fantastic aircraft into the hands of the U.S. Marine Corps."

The four CH-53K Engineering Development Model (EDM) aircraft have already completed more than 450 hours of flight testing at Sikorsky's Development Flight Center in West Palm Beach, and continue to drive to the edges of the operational envelope with both internal and external loads. The flight test program will continue to operate as it has from the beginning under an Integrated Test Team (ITT) that is comprised of Sikorsky, U.S. Navy Naval Air Systems Command (NAVAIR), and U.S. Marine Corps (USMC) personnel. Testing will continue in both locations, West Palm Beach and Patuxent River throughout the transition period.

"Bringing the CH-53K flight test program to PAX is an exciting milestone; many of the employees dedicated to its advancement now have the opportunity to work right down the street from it," said Col. Hank Vanderborght, U.S. Marine Corps program manager for the Naval Air Systems Command's Heavy Lift Helicopters program, PMA-261.

The CH-53K provides unmatched heavy lift capability with three times the lift of the CH-53E that it replaces. With the increased payload capability and a 12-inch wider internal cabin compared to the predecessor CH-53E, the CH-53K's increased payload capability can take the form of a variety of relevant payloads ranging from multiple U.S. Air Force standard 463L pallets to an internally loaded High Mobility Multipurpose Wheeled Vehicle (HMMWV) or a European Fennek armored personnel carrier. In addition, the CH-53K can carry up to three independent external loads at once providing incredible mission flexibility and system efficiency.

The CH-53K offers enhanced safety features for the warfighter. Safety is enhanced with full authority fly-by-wire flight controls and mission management that reduces pilot workload and enables the crew to focus on mission execution because the CH-53K all but "flies itself."  Features include advanced stability augmentation, flight control modes that include attitude command-velocity hold, automated approach to a stabilized hover, position hold and precision tasks in degraded visual environments, and tactile cueing that all permit the pilot to confidently focus on the mission at hand.

Further, the CH-53K has improved reliability and maintainability that exceeds 89 percent mission reliability with a smaller shipboard logistics footprint than the legacy CH-53E.

The U.S. Department of Defense's Program of Record remains at 200 CH-53K aircraft. The first six of the 200 Program of Record aircraft are under contract and scheduled to start delivery next year to the Marine Corps. Two additional aircraft, the first low rate initial production aircraft, are under long lead procurement for parts and materials, with deliveries scheduled to start in 2020. The Marine Corps intends to stand up eight active duty squadrons, one training squadron, and one reserve squadron to support operational requirements.