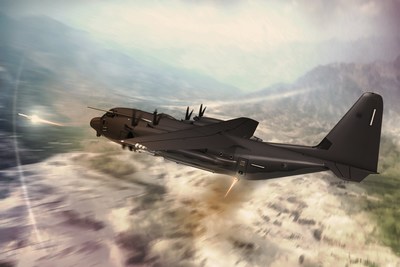 The C-130J-SOF is the 10th production variant of the Super Hercules. This multi-mission aircraft is specifically intended to meet the unique demands associated with executing operations of strategic importance in support of international Special Operations Forces (SOF).

"The C-130J's inherent versatility is capable of supporting missions across a broad spectrum of military operations, and this is amplified once again with the C-130J-SOF," said Orlando Carvalho, executive vice president of Lockheed Martin Aeronautics. "As our global partners face increasing and evolving threats that transcend borders, they want a proven solution. The C-130J-SOF, is in fact, the solution that will ensure security is preserved around the world."

"Our global partners said they need to support their SOF teams with a solution that is reliable, affordable, effective and integrated. They must support their teams in the sky, on the sea and on the ground," said George Shultz, vice president and general manager, Air Mobility and Maritime Missions at Lockheed Martin. "International operators want a special missions Super Hercules that's proven and a true force multiplier. Today, we offer that solution to the world in the form of the C-130J-SOF."

The C-130J Super Hercules is the airlifter of choice for 17 nations, offering superior performance and capabilities, with the range and versatility for every theater of operations. To date, the global Super Hercules fleet has surpassed more than 1.5 million flight hours.

To learn more about the C-130J, visit www.lockheedmartin.com/c130