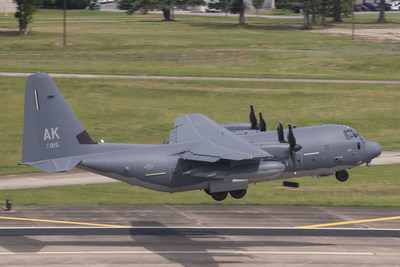 This HC-130J will be operated by the 211th Rescue Squadron (RQS), 176th Wing stationed at Joint Base Elmendorf-Richardson, Alaska. The 211th RQS previously operated legacy HC-130P aircraft to support personnel recovery missions in Alaska and the Pacific Theater. These aircraft also act as aerial refuelers, providing support to the HH-60 Pave Hawk search-and-rescue helicopters that are also assigned to the 176th Wing. This is the first of four HC-130Js that will be delivered to the Alaska Guard.

"The delivery of this HC-130J Combat King II represents a new era for both the Air National Guard and the Alaska Guard. This aircraft provides the increased capabilities and enhanced performance that is essential for these Airmen to support their search and rescue mission," said George Shultz, vice president and general manager, Air Mobility & Maritime Missions at Lockheed Martin. "These men and women live their motto – 'That Others May Live.' We're proud the HC‑130J Combat King fleet plays an essential role in supporting this commitment."

The HC-130J is one of eight production variants of the C-130J Super Hercules, which is the world's most proven and versatile airlifter. The C-130J is the airlifter of choice of 17 nations. Learn more about the C-130J on our website: www.lockheedmartin.com/c130.