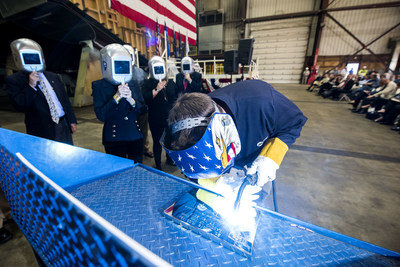 Ship sponsor Barbara Broadhurst Taylor completed the time-honored tradition and authenticated the keel by welding her initials onto a steel plate that will be placed in the hull of the ship.

"It is a tremendous honor to serve as the sponsor of the future USS St. Louis," Taylor said. "The keel-laying ceremony is a great milestone, and I look forward to supporting the ship and its crew throughout the building process. I know the people of St. Louis and Missouri will proudly support her when she is commissioned and officially enters the Navy fleet."

The Lockheed Martin-led industry team is currently in full-rate production of the Freedom-variant of the LCS, and has delivered four ships to the U.S. Navy to date. The future USS St. Louis is one of seven ships in various stages of construction at Fincantieri Marinette Marine, with two more in long-lead production.

"We are proud to build another proven warship that allows our Navy to carry out their missions around the world," said Joe North, vice president and general manager of Littoral Ships and Systems. "We look forward to working with the U.S. Navy to continue building and delivering highly capable and adaptable Freedom-variant Littoral Combat Ships to the fleet."

The Lockheed Martin-led LCS team is comprised of shipbuilder Fincantieri Marinette Marine, naval architect Gibbs & Cox, and more than 800 suppliers in 42 states. The Freedom-variant's steel monohull design is based on a proven, resilient design recognized for its stability and reliability.

Costing less than a third of a brand new Arleigh Burke-class destroyer, the Littoral Combat Ship is the Navy's most affordable surface combatant shipbuilding program and the ideal platform to grow the U.S. Navy fleet quickly and affordably.