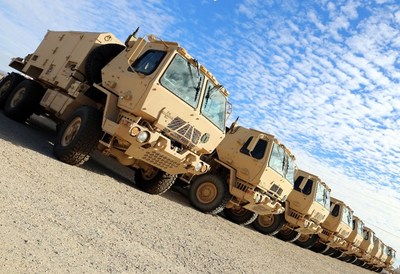 "The Q-53 system helps troops know what is going on around them in an increasingly complicated world," said Rick Herodes, director of Lockheed Martin's Q-53 radar program. "What's so special about the Q-53 radar system is the inherent flexibility of its software controlled active electronically scanned array (AESA). Our engineers can adjust the Q-53's software to address emerging threats. Having control in the software allows quick reaction to whatever comes next – so the first Q-53 radar system off the line could be quickly updated to be just as capable as the 170th Q-53 radar system."

Lockheed Martin is the only company producing active electronically scanned array (AESA) radars for the Army.

Over the last 10 years new threats have emerged including unmanned aerial systems (UAS). Thanks to the flexibility of open architecture designs, simple software modifications can be made to adjust radar systems, including the Q-53 radar, to meet various missions. The U.S. Army awarded Lockheed Martin a $28 million contract in November for "quick reaction capability to add counter-unmanned aerial system to the AN/TPQ-53 radar system" simultaneous with its core counterfire mission.

The Q-53 radar can be readily adapted to provide both air surveillance and counterfire target acquisition in one tactical sensor. The radar system demonstrated its multimission radar (MMR) capability by identifying and tracking aerial systems and passing that information to a command and control node, a key capability as the battlespace rapidly becomes more crowded with emerging air threats.

The Q-53 supports counter-insurgency missions as well as high-intensity combat operations. The system is highly mobile on the battlefield; it can be set up in five minutes, taken down in two minutes and supports two-man operation.

Work on the Q-53 radars is performed at Lockheed Martin facilities in Syracuse and Owego, New York, Moorestown, New Jersey, and Clearwater, Florida.