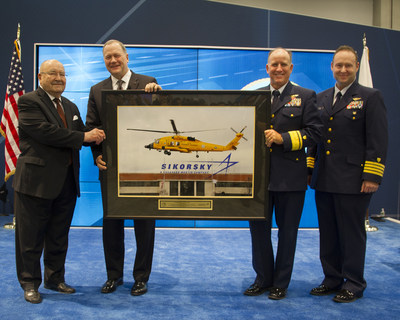 "The year 2017 begins a second century of aviation for the U.S. Coast Guard in which the uninterrupted beat of rotary wing aircraft will continue to carry some of the most courageous and best trained men and women on the planet into hazardous situations for the purpose of saving human lives," said Dan Schultz. "Their selfless courage in Coast Guard helicopters and aboard other vessels at their command exemplifies humanity's best values at work."

The U.S. Coast Guard began accurate record keeping of its helicopter search and rescue (SAR) cases starting in 1993. Since that time, the service has recorded more than 131,000 SAR missions in helicopters, including 36,942 in the Sikorsky H-60 Jayhawk model, which became operational in 1991.

"The Coast Guard is proud to be a pioneer and advocate during early rotary-wing aviation, especially for search and rescue," said Callahan. "Coast Guard aviators continue to rely on helicopters to perform missions under hazardous conditions to save lives and property. Countless lives have been saved due to the unique abilities of helicopters, and they will continue to be a valuable asset for the Coast Guard."

Dangling from a primitive rescue hoist beneath a Sikorsky R4 (HNS-1) helicopter whose design his father, Igor, had flown for the first time in 1939, Sergei placed his absolute trust in his commanding officers, who themselves had received their pilot licenses just months earlier.

"There is no doubt in my mind that the Coast Guard pioneered the use of the helicopter as a rescue vehicle," said Sergei. "It was under the leadership of two brilliant men, Commander Frank A. Erickson and Lieutenant 'Stew' Graham, that the rescue hoist and the Erickson basket were developed in 1944-1946, in some cases with me as the test rescuee. The Coast Guard has proven time and time again Igor Sikorsky's prediction that 'the helicopter will prove to be a unique instrument for the saving of human lives.'"

On January 3, 1944, Cmdr. Erickson performed the world's first life-saving mission in a helicopter — shortly after the destroyer USS Turner blew up while operating off the coast of New Jersey. Flying from New York City during a severe winter storm, he successfully delivered cases of critically needed blood plasma to a shore-based field hospital at Sandy Hook near the accident site.

Only with the fielding of the vastly more powerful Sikorsky S-51 helicopter, and later the S-55 in the late 1940s and early 1950s, said Sergei, did the true value of the helicopter become apparent as a rescue vehicle.