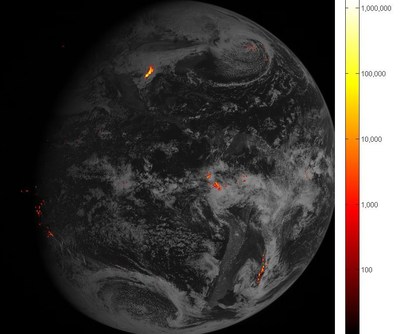 GOES-16 is the first of a series of four next-generation satellites built by Lockheed Martin, and each will host a GLM and SUVI instrument. The GOES-R program—as the series is called—is a collaborative mission between NOAA and NASA.

"GLM is a first-of-a-kind capability for lightning monitoring at geostationary orbit," said Jeff Vanden Beukel, Lockheed Martin GOES-R instruments director. "Seeing individual lightning strikes from 22,300 miles away is an incredible feat, plus we're monitoring cloud-to-cloud lightning for the first time. All this will give forecasters better data to give people on the ground, at sea and in the air faster severe weather warning."

"We built SUVI so it can deliver solar storm warning faster than any other space instrument, plus an upgrade in resolution over current GOES systems," said Jeff Vanden Beukel, Lockheed Martin GOES-R instruments director. "Solar storms can cause blackouts here on Earth and shut down satellites in orbit. Faster warning lets us protect these assets before disaster strikes."