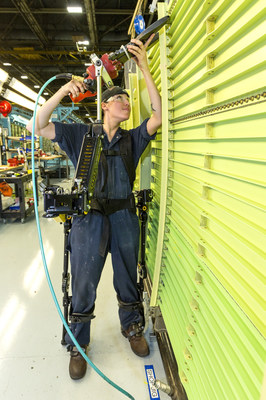 Summarizing tests at a U.S. Navy shipyard, the NCMS report found that the FORTIS exoskeleton could mitigate nearly all injuries from power tools by making the tools effectively weightless during operation. Additional benefits included increased productivity and quality improvements. The report noted that shipyard work is hazardous, with a high rate of injury in the United States.

"It is significant that in both tasks where the exoskeleton was used, the amount of work accomplished and time-on-task increased. We received valuable feedback from the study, and it's clear that FORTIS can prevent accidental and long-term injuries while allowing workers to be more productive," said Glenn Kuller, Advanced and Special Programs vice president at Lockheed Martin Missiles and Fire Control. "That's a double-win, for both workers and employers."

To support the test and evaluation efforts, Lockheed Martin provided FORTIS units on loan to two naval shipyards. Testing and evaluation measured worker productivity, work quality and ergonomic considerations. Feedback was overwhelmingly positive, with participants expressing a desire to use the exoskeleton in their regular work. The study proved that using human augmentation to accomplish shipyard tasks involving heavy tools can improve productivity while mitigating a significant cause of worker injury.

The FORTIS exoskeleton is an unpowered, lightweight exoskeleton that increases an operator's strength and endurance by transferring the weight of heavy loads from the operator's body directly to the ground through a series of joints at the hips, knees and ankles. Originating from Lockheed Martin's exoskeleton research to assist soldiers in carrying heavy equipment over long distances, the same principles were applied to exoskeleton development for use in industrial settings.