DENVER, June 2, 2021 /PRNewswire/ -- To learn more about how terrestrial planets evolve over time, NASA selected the VERITAS and DAVINCI+ missions for its Discovery Program, both bound for Venus. Lockheed Martin will design, build and operate both spacecraft. The missions will launch in the 2028-2030 timeframe, and will combine to study Venus' dense atmosphere, topography and geologic processes in great depth. 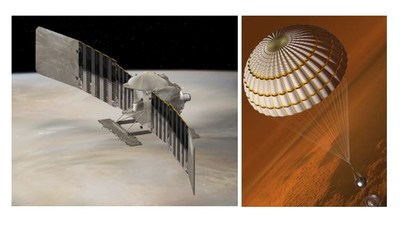 Both missions will aim to discover how Venus – which may have been the first potentially habitable planet in our solar system – became inhospitable to life. They represent NASA's return to Earth's sister planet after more than three decades.

"We're very grateful for this opportunity to work with NASA and the missions' principal investigators to fully understand how rocky planets evolved and what it means for our planet, Earth," said Lisa Callahan, vice president and general manager of Lockheed Martin's Commercial Civil Space business. "Our team who designed these two spacecraft to study Venus in unprecedented detail – and yield answers to its greatest mysteries – is beyond excited!"

The operations and science for DAVINCI+ – which stands for Deep Atmosphere Venus Investigation of Noble Gases, Chemistry and Imaging Plus – will be managed by NASA's Goddard Space Flight Center in Greenbelt, Maryland.

VERITAS – which stands for Venus Emissivity, Radio Science, InSAR, Topography & Spectroscopy – will have its science and operations managed by NASA's Jet Propulsion Laboratory in Southern California.

Why Does Venus Matter?
Though scientists believe it was once similar to our home planet, Venus evolved to be much different – and far less habitable – than Earth.

As Earth's own climate and geology evolve, interest in returning to Venus has surged because the planet currently suffers from a runaway greenhouse gas effect.

Over millennia, water that may have once existed on Venus' surface evaporated and carbon dioxide built up in the atmosphere – leading to a present-day surface temperature that's hot enough to melt lead.

Previous missions to Venus have even provided tantalizing clues that the planet may have once harbored a liquid ocean.

DAVINCI+ and VERITAS will build on those findings, helping scientists better understand the existence of past life on Venus and how its atmosphere and geology may have influenced its ultimate outcome.

Science from these missions could provide clues about Earth's own future and will also help inform future missions to the planet.

Studying Venus' Geology with VERITAS
As an orbiter that draws on heritage from the Lockheed Martin-built MAVEN spacecraft at Mars, VERITAS will give scientists the most detailed maps ever produced of Venus' obscured landscape.

When VERITAS arrives at Venus, the orbiter will use a special technique called aerobraking to carefully insert itself into an optimal science position in the planet's orbit.

As the spacecraft circles Venus in four cycles near the planet's poles, two extremely sensitive imagers will capture things like volcanic activity, tectonics and outgassing of any life-related compounds like water or carbon.

Measuring Venus' Atmosphere with DAVINCI+
Part orbiter and part probe, the DAVINCI+ spacecraft will provide a look into Venus' atmosphere in unprecedented detail.

When it arrives at Venus, the DAVINCI+ spacecraft will jettison a probe to the planet's surface. As it descends, three instruments will take the first-ever live measurements from inside Venus's atmosphere – assessing gases, material composition, temperature and pressure.

A camera on board will also snap the most detailed images ever taken of Venus' hidden surface, which is obscured by thick, noxious clouds.

Legacy of Planetary Exploration
VERITAS and DAVINCI+ are the eighth and ninth NASA Discovery Program missions Lockheed Martin has been part of. Previously, the company has:

NASA's Discovery Program-class missions are capped at a specific, relatively low cost. They are managed for NASA's Planetary Science Division by the Planetary Missions Program Office at Marshall Space Flight Center in Huntsville, Alabama. The missions are also designed and led by a principal investigator, who assembles a team of scientists and engineers to address key science questions about the solar system.

Over 50 years, Lockheed Martin has helped NASA explore every planet of our solar system, and continues to develop new technologies for future space missions.

The company also supported NASA on Magellan, the agency's prior mission to Venus 30 years ago. Lockheed Martin built that spacecraft, which produced the first ever maps of Venus' surface from orbit.

Now, the team builds on that legacy of discovery with DAVINCI+ and VERITAS.